Over Labor Day weekend 2017 (the 1st weekend in September) we visited Saguaro National Park and stayed in Tucson, AZ. We’d waited until September to take this trip in hopes of avoiding the worst of the summer heat, but Mother Nature had other ideas, so we were out with the cacti and lizards in the 100˚+ heat after all. Luckily, we are desert dwellers, so we knew how to prepare, and you can usually get a pretty good view of the National Parks without going far from your car.

We drove from Albuquerque to Tucson, since we’d never been that far south in New Mexico. Interstate Highway 25, which runs north/south between  and Las Cruces, NM, about 40 miles from the Mexican border, also roughly follows El Camino Real from Santa Fe NM south to El Paso, TX. El Camino Real de Tierra Adentro National Historic Trail was created by the Spanish conquistadors and colonists when Juan de Oñate led an expedition north from Mexico City to what is now Santa Fe, NM. The route formalized older footpaths and trade routes of the native peoples.

For the next 300 years, El Camino Real was the only wagon road into New Mexico and the Southwest, bringing thousands of colonists, missionaries and supply caravans from Southern New Spain into newly established Spanish towns that dotted the Rio Grande. The trail facilitated the introduction of horses, cattle, European agriculture and irrigation systems, exotic flora, and many cultural practices that still flourish in the region today. (From El Camino Real at nps.gov )

Someday, we’ll do the El Camino Real route justice and visit historic and interpretive sites in order, but for now, we stop here and there whenever we drive on part of it, and imagine what it was like.

From I-25, we turned west onto I-10, which took us all the way to Tucson. We encountered a border patrol stop not far west of Las Cruces. All cars were required to slow down so that they could see the passengers in the car. They only stopped cars when they didn’t like the look of the people inside. In a state that’s 48% Hispanic, at a spot that’s about 25 miles from the Mexican border. I’ll let you draw your own conclusions about who gets pulled over. 😡

Finally we reached our hotel, after an 8 hour drive (with stops). We stayed at the Lodge on the Desert, a gorgeous old 1930s hacienda that’s been updated into a 100 room boutique hotel. The grounds are landscaped with native desert plants and beautiful flowers, fountains, and a pool. The rooms have features such as Mexican tile, kiva fireplaces, and Spanish-Colonial style furniture. The complementary hot breakfast buffet can be enjoyed inside or outdoors in a courtyard with a fountain and fireplace. My only complaint is that the fixtures in the bathrooms were all built for giants, from the height of the sinks to the shower head. Everything else was lovely, especially the hardworking staff.

We started on the first day with the Rincon Mountain District. The visitor’s center is small, but it does have a few nice displays, and an orientation video. The park service staff is friendly and helpful. That’s been my experience at every national park, monument, wildlife refuge, etc., so it’s not unusual, but still nice. The driving loop has a large number of interpretive signs that explain what you’re seeing and the ecology and history of the area.

The saguaro are plentiful in this half of the park, but younger than in the western half. There were some major freezes in the 20th century that killed many of the saguaro in this section. I loved it though. It’s fascinating to see and read about the life stages of the saguaro. They tend to sprout under the shade of nurse plants, such as palo verde, making a pretty picture as the saguaro grows as large as its nurse plant. Sometimes a palo verde will be nursing several saguaro.

The east side was full of butterflies, especially huge butterflies. It was also grassy and flowery. We didn’t see much wildlife, other than the butterflies, probably because of the heat, but it was a beautiful and informative drive. Overall, I liked this half better on this trip, partly because this side of the park was much less crowded than the west side.

The west side is where the full grown saguaros live. The visitor’s center is bigger and fancier. There’s a very short interpretive trail just outside with the most common native plants labelled. That was the only trail we walked, because of the heat. There are also water bottle refill stations at both visitor centers.

The driving loop was unpaved (as of the weekend we were there- that could always change). It looked like it might have been bulldozed out recently, so maybe they’re planning to pave it. They weren’t any interpretive signs along the drive. We did see more birds, pollinators, lizards, and small mammals on this loop, despite the road being busier.

Metamaiden was especially taken with the full grown saguaros reaching for the sky. She liked the western district better.

After we left the western half of the national park, we stopped at the nearby Arizona-Sonora Desert Museum. This wonderful place is a combination zoo, aquarium, botanical garden, natural history museum and art museum. The museum is dedicated to encouraging “people to live in harmony with the natural world by fostering love, appreciation, and understanding of the Sonoran Desert.”

85% of the museum is outdoors, so be prepared for the weather, but shade is readily available. The museum covers 21 acres with 2 miles of paths through various desert habitats, animal exhibits, art installations, and educational exhibits. It’s eclectic, fascinating, and fun. There were gorgeous flowers and giant butterflies everywhere. Hummingbirds get an aviary all to themselves.

Other highlights include the small aquarium, with its display of cute little garden eels; the otters, which can be viewed from above and underground; and the walk-in aviary with native birds such as a mother quail leading her babies across the paths. We only had time to see about a quarter of the museum. You could probably spend most of a day taking in the exhibits and attending the special live programs.

There are also restaurants and gift shops scattered throughout the grounds, and a bookstore near the entrance. The gift shops feature unique items, including regional arts, crafts and foods, many by Native American artists. The bookstore carries all of the books from the museum’s own ASDM Press, and many others on the human and natural history of the region, including books for children.

I was able to replace a book that I’d loaned out many years ago, Women’s Diaries of the Westward Journey, which is just what it sounds like- stories of female pioneers from 1840-1870 taken from primary sources, which I highly recommend. I also bought a second book, The Blue Tattoo: The Life of Olive Oatman, the true story of a 13 year old Mormon pioneer girl who was captured by Native Americans in 1851, assimilated into a tribe, traded back into European society at age 19, and ended up the wife of a wealthy Texas banker. Her chin was prominently tattooed while she was still a teenager with the tribes.

There were many other interesting sights to see in and around Tuscon that we couldn’t get to in just a weekend, so I have no doubt we’ll return someday. The largest rose bush in the world in the world, in Tombstone, AZ, won’t elude me forever.

El Camino Real: A Little History and a Few Photos

These were taken at and near a rest stop near Socorro, NM. Notice there are almost no trees for shade, but the ground is covered with spiky, spiny desert scrub that’s 2-4 feet high (about .5-1 meter). Imagine walking through that day after day in the blinding 100 degree heat, sometimes in winds of 20-30 miles and hour, no shade or rain in sight. The Rio Grande River is nearby, at least, but there were also hostile Native American tribes for parts of the journey. I am always in awe of what immigrants of all eras go through on their journeys.

This was the year 1598, years before the British established settlements in any part of North America. 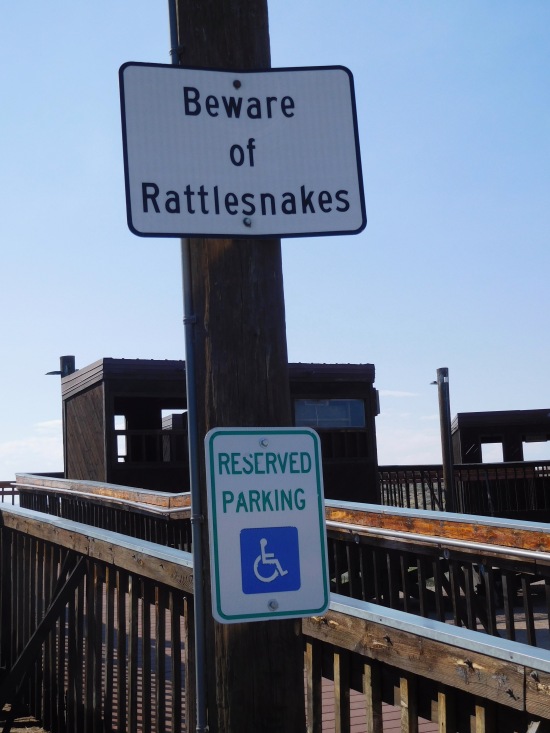 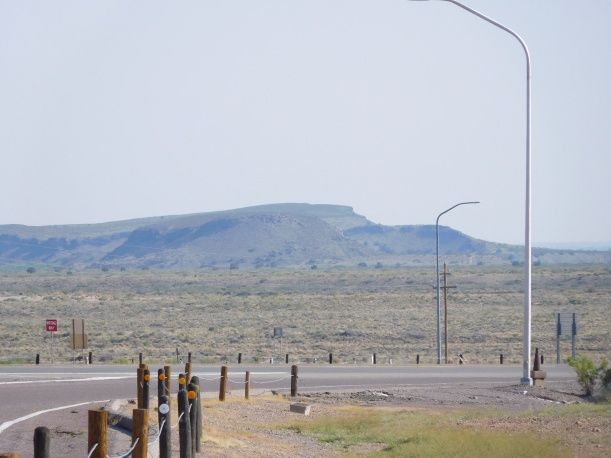 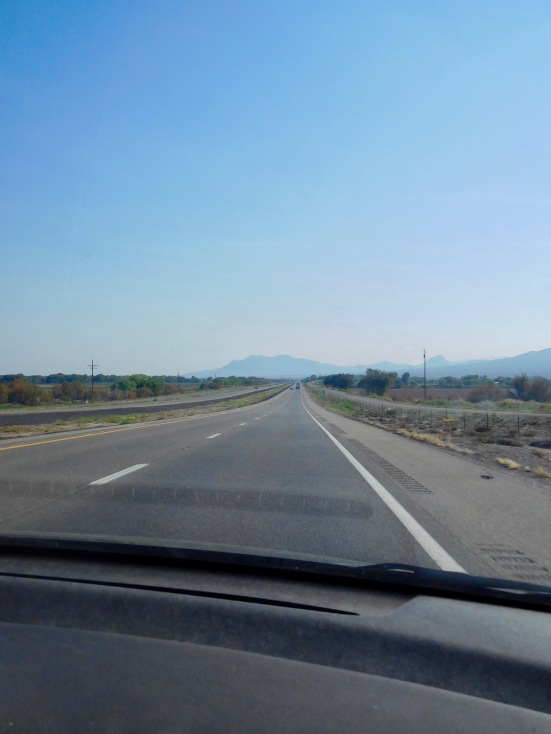 This is the portion of the park that’s on the east side of Tuscon and was much less crowded when we were there. The saguaros are younger in this section than in the western part of the park. I included photos of the sign that explains the history behind the difference. We enjoyed seeing the mighty Saguaros during all of their life stages. It’s a bit like watching Groot grow up. 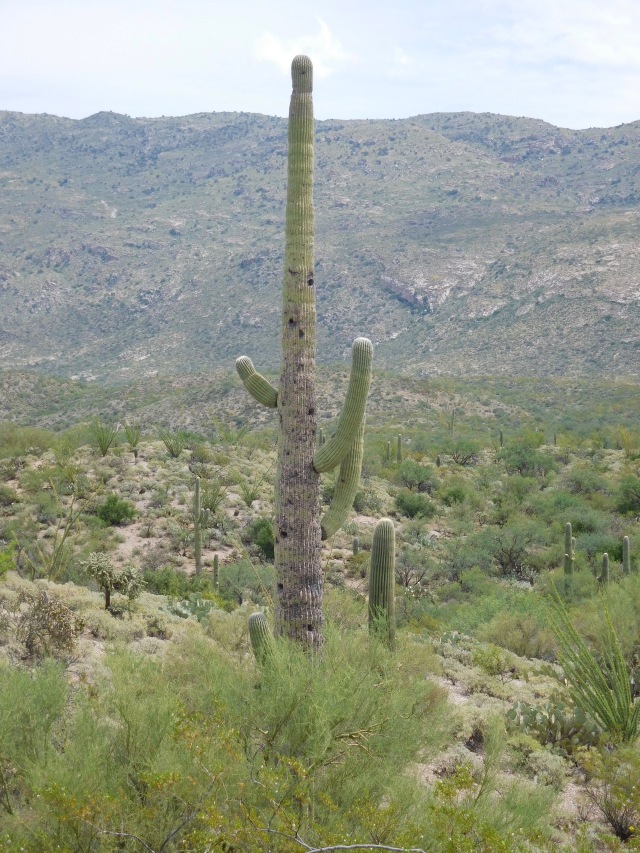 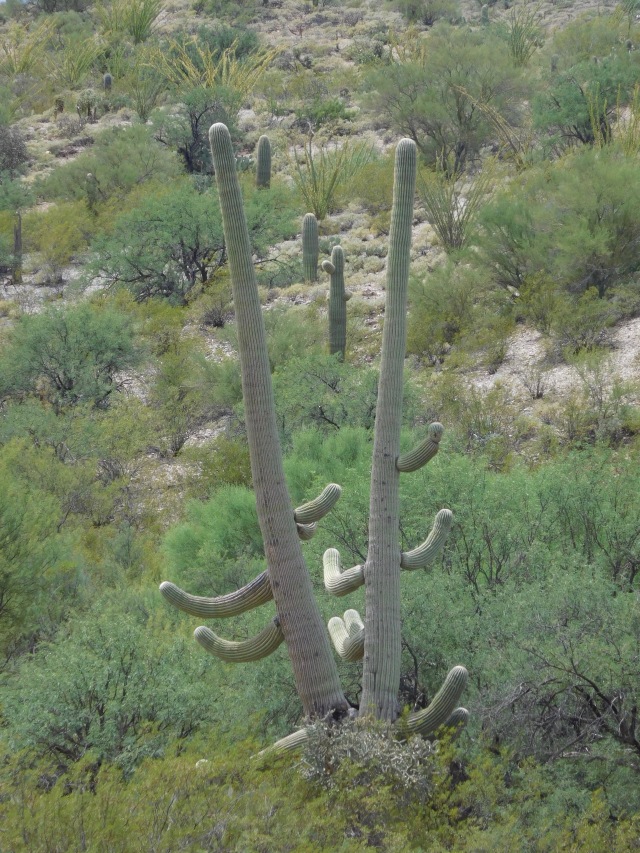 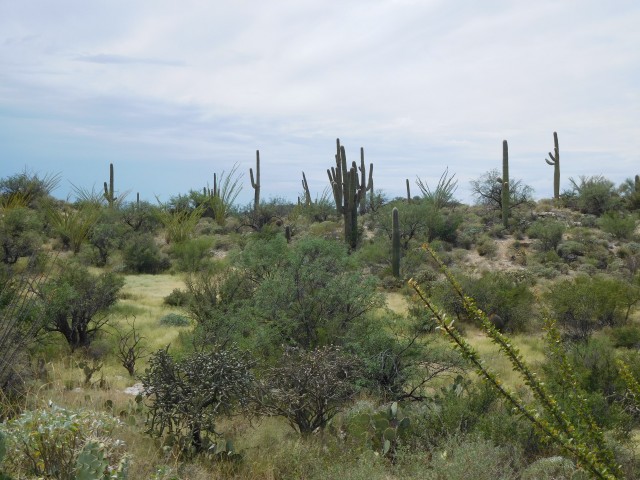 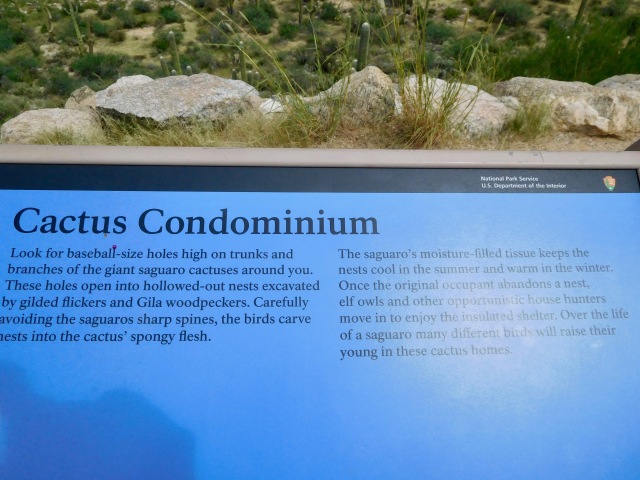 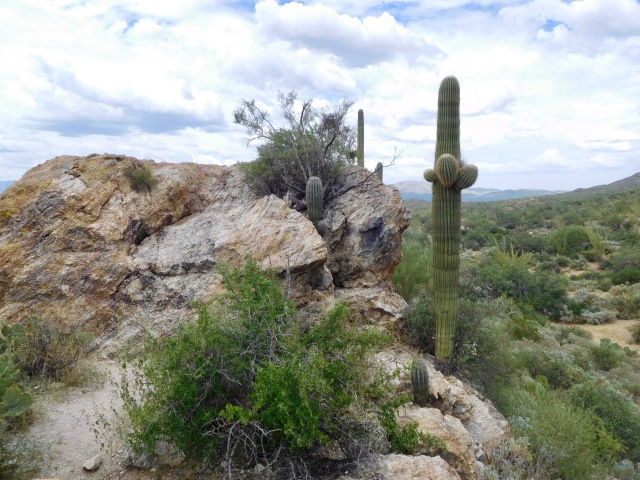 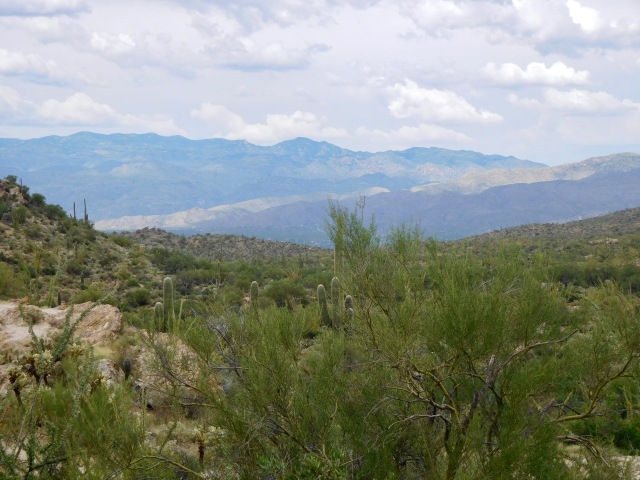 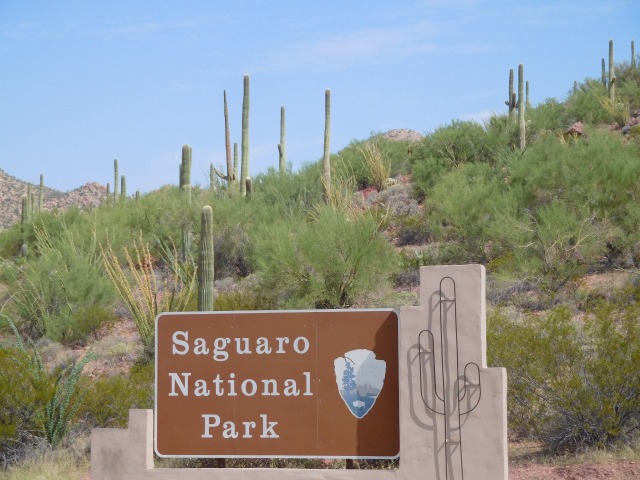 These first three are views from the drive to the park. ☟

This one has leftover flower remnants/seed pods on top of its arms. 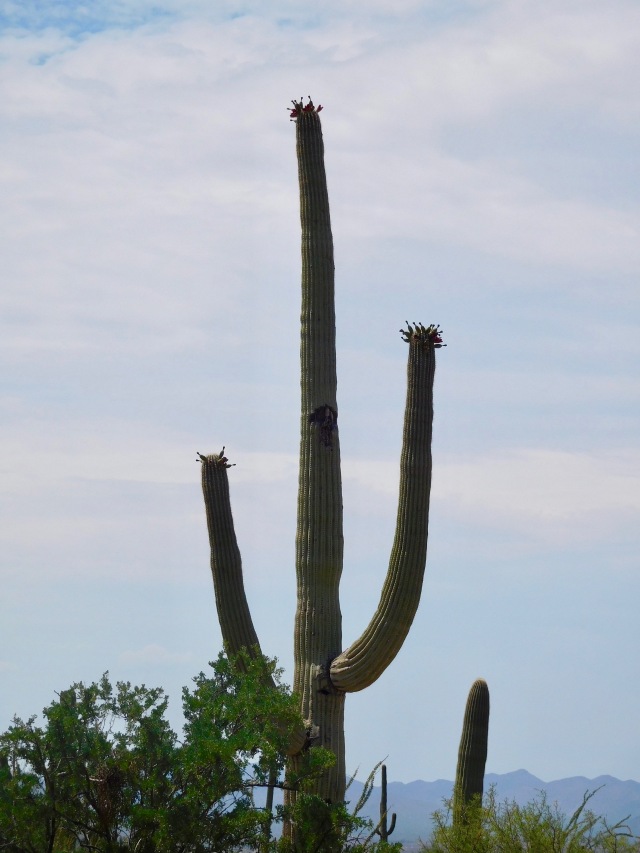 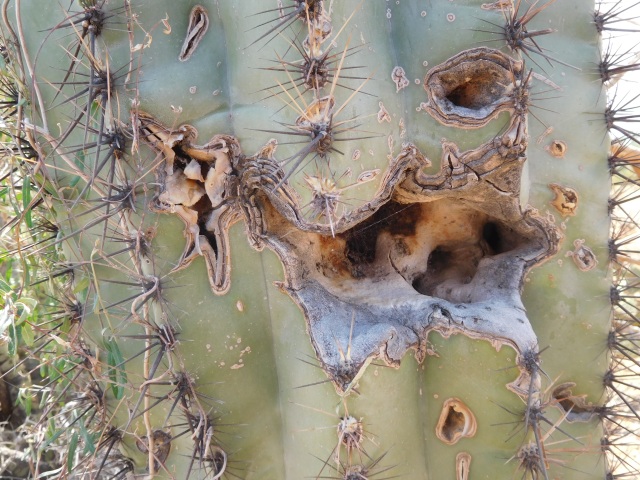 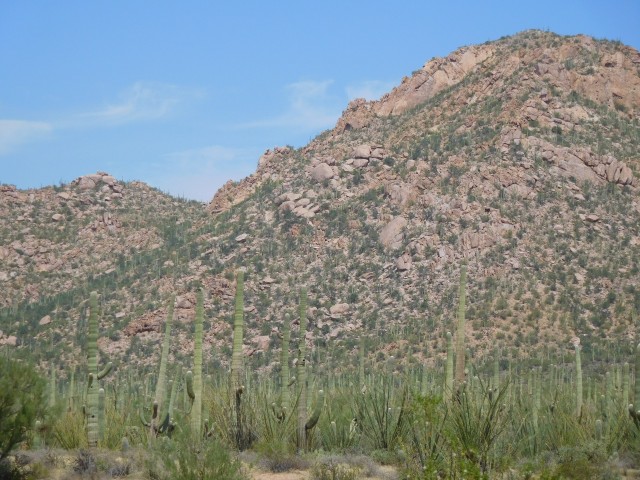 Garden Eels. They are about as thick as a finger and up to 16 inches long. 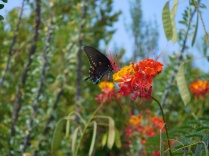 Red Bird of Paradise, with and without butterflies. 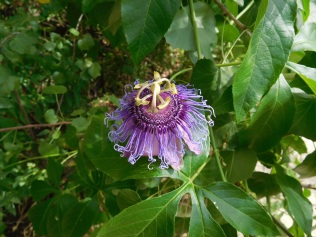 Passionflower and nest on cactus arms.

Dinosaur to Bird Evolution metal sculpture at the entrance to the Walk-In Aviary. 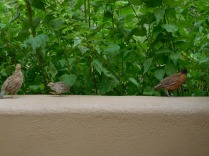 Otter and beaver, from above and below. 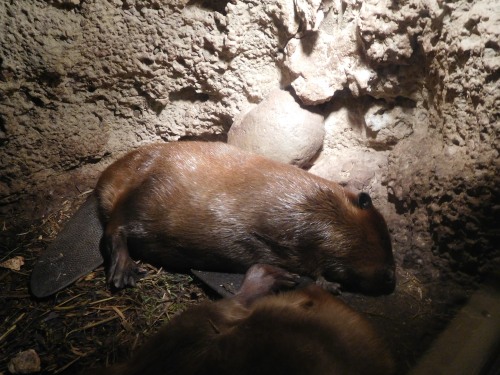 Sleeping Beaver. It was a long, busy day.

Sunset over El Camino Real on the drive back to Albuquerque.